News from the Southern Black Forest

BMS accompanies the modernisation of the dry part at the Waldhaus private brewery.

For a premium beer, high quality standards and proven methods are essential if the brew is to be worthy of that name. The Waldhaus private brewery relies on biologically pure yeasts, a variety of aromatic natural hops, barley malt from controlled integrated farming – and, of course, the very best crystal-clear brewing water from primary rock springs in the Southern Black Forest region. Sound reasons for Waldhaus beer specialties regularly ranking among the winners in national and international competitions.

The high demands placed on the quality of the products are also reflected in the choice of technical equipment. We are proud to accompany the private brewery Joh. Schmid GmbH in the relocation and modernisation of the dry part. In this way, BMS Maschinenfabrik ensures that the steady growth is implemented with technically adequate means.

In focus: In the following we portray the eventful history of the brewery, explain the challenges of the plant modernisation and outline the successful results of the project – giving you an insight into actual brewery practice. 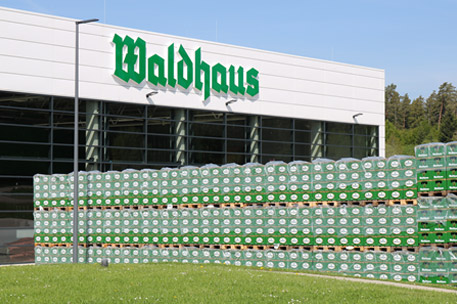 To technically accommodate this steady growth Waldhaus relocated and modernised the entire dry part at the beginning of 2019.Portrait of the Waldhaus private brewery

The brewery complex is nestled in the centre of the Southern Black Forest, between Waldshut-Tiengen and the Schluchsee lake, at an altitude of 800 metres above sea level. Here, where once stood a forester’s lodge with its own integrated brandy distillery and tavern, was one of the typical meeting points for carriage drivers. People came here in search of a place to rest from the stresses and strains of timber transport. Things did not change until the year 1833 when the former magistrate Dietsche from the nearby Remetschwiel purchased the forester’s lodge and built a brewhouse on the site.

A fire in 1846 put an abrupt end to all of these activities and destroyed the entire facility. However, it quickly emerged that the plant would be rebuilt on the same spot, just 200 metres further south. This is exactly where the Waldhaus private brewery stands today.

In 1894 the brewery was taken over by Johann Schmid from Bannholz. The premises also included an inn, a malt house and some agricultural land. When the brewery passed on to the oldest son Friedrich in 1939 the annual output was around 3,500 hectolitres. This output increased significantly to 10,000 hectolitres in 1969 when the brewery was handed over again to the son, Helmar Schmid. Since 1997 Dieter Schmid has been responsible for the brewery that is now being run in the fourth generation. 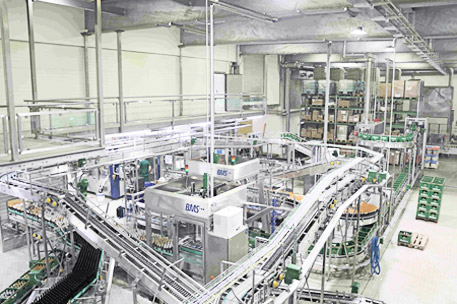 The core elements of the project were two portal packers with three heads each, including the required handling parts for 0.5-litre NRW bottles in the 20-bottle crate and 0.33-litre Vichy bottles in the 24-bottle crate. There was also a new order for the pack and bottle conveyor.

BMS Maschinenfabrik is partner in the expansion of the production capacities

A brewery that is run as a beer manufactory, with a steady upward trend is bound to face challenges at some time or other. Not just because it has to accommodate different drinking habits and new target groups, but also due to the fact that the maximum capacities of plants represent a natural limit to growth. Success meant that changes were going to be necessary, as the following development illustrates:


Frank Böhler, third brewmaster and manager of the bottling hall, points out: “In order to achieve our required level of quality and precision a new labelling machine was needed.” This required an extension and partial relocation of the filling line, including a new dry part. In this way, it was possible to significantly increase the output capacity of the plant. 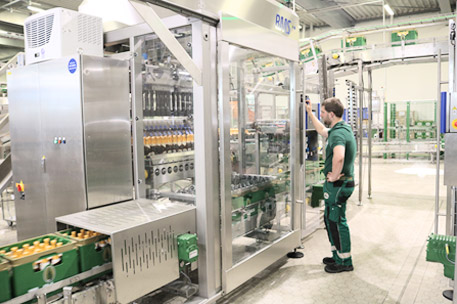 To make these goals compatible, various options had to be discussed and solutions developed. First of all, the idea was to integrate the two existing packers into the new dry part. This idea was quickly abandoned as it would have led to perfectly labelled bottles being fed into an old packer, which might have damaged them. It became clear that this process could only be implemented properly with a complete replacement of the packers.

And this is where BMS Maschinenfabrik comes in…

Bearing these issues in mind, Waldhaus set out to find a suitable project partner. Apart from visiting trade fairs, Waldhaus also went to see the machines used by other colleagues in practice. Ultimately the decisive factor in favour of BMS was that the BMS machines were “of a compact, simple and robust design“, says first brewmaster Bernhard Vötter.

Frank Böhler, third brewmaster adds: “Everything is self-explanatory. Our employees had already set up the new packers even before being given full instructions.“

The new project goal: relocation and modernisation of the dry part as a first step towards a completely new filling line. 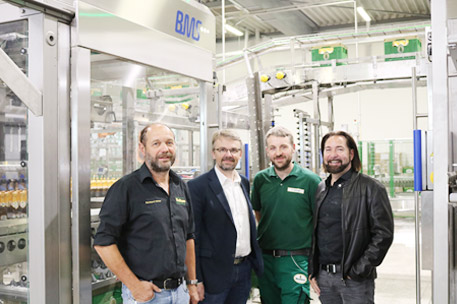 “This was an exemplary cooperation.“ Clearly satisfied with the new dry part of the Waldhaus private brewery (from left to right): Bernhard Vötter, first brewmaster, Martin Gruner, technical manager, Frank Böhler, third brewmaster and head of the bottling hall, as well as Dieter Schmid, managing director in the fourth generation

our task was to design the plant in such a way that we could follow up with the wet part through further modernisation stages. The goal being to increase the output of the entire line to 24,000 bottles per hour at the filler.

After the signing of the contracts at the beginning of April 2018 and the project draft design in place, the following core elements of the project were identified:


BMS was responsible for the layout, project management as well as the mechanical and control system interface definitions for the existing and new machines.

After preparation of the building through the Waldhaus private brewery, including removal of a lightweight wall to the neighbouring warehouse and a new design of the floor including the drains, the exciting and demanding stage began:


During the conversion, the palletising was still carried out manually. Then from 7 February onward production was stopped. If it had not been possible to adhere to 26 February, as scheduled for the restart of production, the first brands would have run out. BMS had guaranteed the Waldhaus private brewery a capacity of 60 per cent at the time of commissioning, so that there would be no bottlenecks in the delivery.

As a result, the output of the filling line was increased from 12,000 to 15,000 bottles per hour, also thanks to the new design of the bottle and pack conveyor. We then established a kind of buffer which increased the efficiency of the plant. The entire plant can now be operated by one employee per shift, together with a forklift driver and a sorter. In addition, electricity savings of about one third have been achieved. Dieter Schmid, managing director of the Waldhaus private brewery comments: “This cooperation was exemplary. And especially from entrepreneur to entrepreneur. It was fun. Good advice, good plans, good machines and plenty of passion on top – I would strongly recommend BMS to anyone!

For once we will leave these words uncommented and express our thanks for the opportunities given to us. We look forward to new challenges – and they are sure to come!