At the Rothaus Brewery an outdated glass returnables line with maintenance problems was causing lengthy processes and drawbacks during the day-to-day operations. The time had therefore come for a complete redesign and to pave the way for maximum efficiency in the handling of the 50,000-bottle line. In close cooperation with those in charge of the project we were able to implement a full-scale solution that has simplified many processes.

The following article gives a basic outline of the project, reveals the problems and challenges encountered and highlights the successful approaches taken.

In the anniversary year 2021 - Rothaus has been brewing for a proud 230 years this year - a new major project will be implemented with the complete modernization of a 50,000 glass returnable line in the Black Forest.

A fresh bottle of “Tannenzäpfle“ is definitely an item that belongs on every well-laid table in the Black Forest. The Rothaus Brewery is representative of this region and well-known for its first-class brewing well beyond the original distribution network. It is a quality conscious brewery that is devoted to its homeland, and it is precisely these attributes that led to the cooperation between BMS Maschinenfabrik and the Badische Staatsbrauerei Rothaus AG.

So what’s it all about? The company has been using a 50,000-bottle glass returnables line for many years; from 2003 to 2018 it was the main production line of Rothaus brewery. This is where mostly 0.33-litre Tannenzäpfle bottles are filled in a three-shift operation, using a palletising system of a long-inactive company that has consequently led to problems in the spare parts supply.

In the following we will be showing you how we initiated a complete modernisation in close cooperation with those responsible at the Rothaus Brewery.

It all started more than 230 years ago and initially had to do with the wish of the local prince abbot, Martin Gerbert, to dissuade the people of the Black Forest from distilling their own schnaps, the so-called “Wässerle“. Then, a few years later on, when Martin Gerbert had to hand over the reins to the Baden State due to the secularisation process, the actual era of this traditional company began. When the 0.33-litre Tannenzäpfle bottle was introduced in 1956 the director of the brewery, Edwin Nägele, decided to make a clear break with the 0.7 litre bottles that were the common size at the time. The rest is history – and always a real treat whenever the occasion arises.

Key data on the Rothaus Brewery in brief: 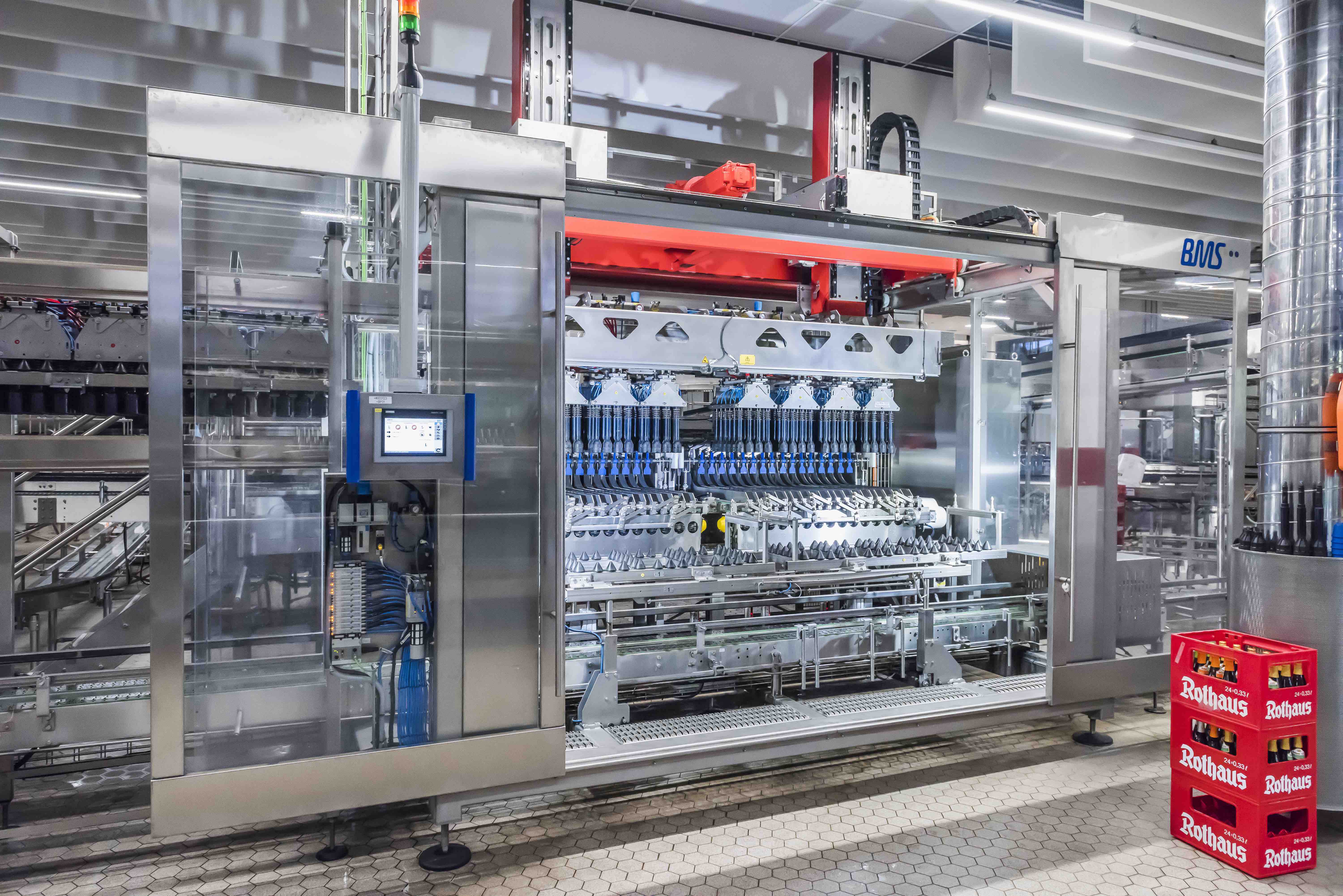 Whereas BMS previously acted primarily as a machine partner, for example in the area of packaging machines, its area of responsibility was significantly expanded in this project.

The palletising system that had been in operation for more than 15 years with the filling line from the year 2003, was becoming a trouble spot in the overall logistics concept at Rothaus. On the one hand, this was due to the loading system being too weak, and on the other hand due to a lack of maintenance and spare parts from the manufacturer. As the manufacturer no longer existed, own efforts and a lot of improvising had become the order of the day. The first planning phase got under way embedded in an overall modernisation scheme, including pallet labelling.

The task: Planning and design of a modern returnables filling line without major changes in the infeed and outfeed; installation of a stand-alone control system for the pallet elevator.

Detail work: Complete implementation from layout, component procurement, dismantling and sale of the old plant up to assembly automation and commissioning as well as operator training.

Commencement of the project: 11 September 2020

Due to the fact that the Rothaus Brewery already opted for BMS palletisers in 2017, it was an obvious choice to integrate this exact type in the layout, thus streamlining and simplifying maintenance, operation control and spare part management. We also took into account the customer’s wish to leave the crate infeed and outfeed largely unchanged. Assembly and disassembly work in the palletising area was therefore only possible as long as the interfaces remained compatible.

Roger Jäger, head of filling at Rothaus, explains: “Machinery regulations that have to be met with regard to safety have become a real challenge. And especially for existing plants with a defined footprint. We were nevertheless still able to provide good accessibility to the individual components, this being a prerequisite for cleaning and maintenance.”

Other aspects that demanded BMS know-how and expertise:

To sum up: Many imponderables and obstacles resulting from the previous design of the plant had to be addressed in the customer’s interest. With LOP 4.0, the BMS construction site management software, we were able to coordinate all individual steps with the parties involved, and in a transparent way. 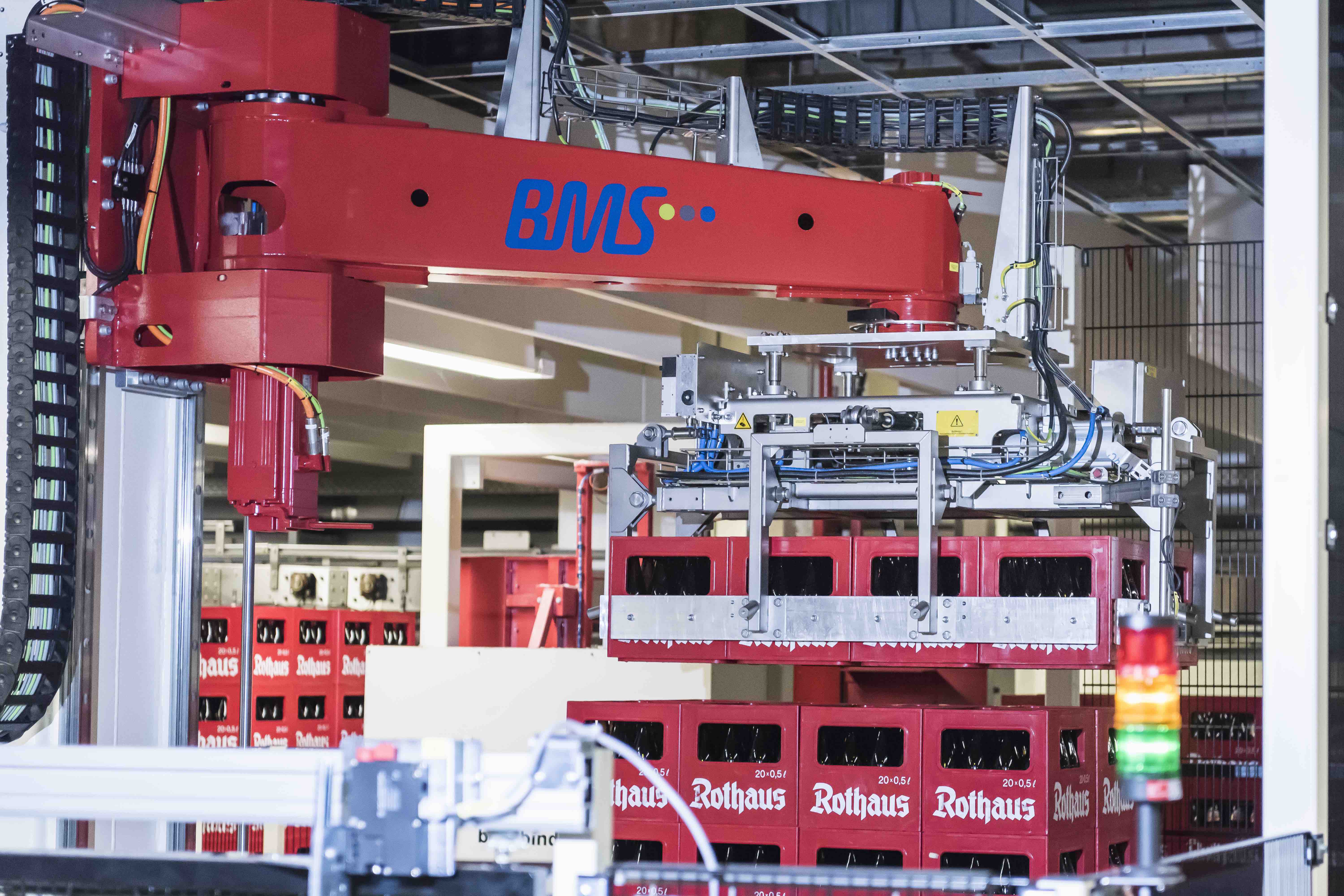 Rothaus opted for a column palletizer for both the loader and unloader.

In the light of the additional challenges caused by Covid-19 restrictions, we would like to point out the particular advantages of LOP 4.0. By sharing the respective status of the project in a transparent and detailed manner with all the parties involved, we were able to reduce friction and coordination losses to a minimum. In contrast to conventional commissioning and project control, LOP 4.0 enables us to improve planning ability, even for complex issues.

More detailed information on the architecture, function and purpose of LOP 4.0 can be found on this overview page LOP 4.0


Interested in more? Click here for the full printed article in the September issue in Getränke! Technologie und Marketing on the cooperation between Rothaus Brewery and BMS Maschinenfabrik. Enjoy!